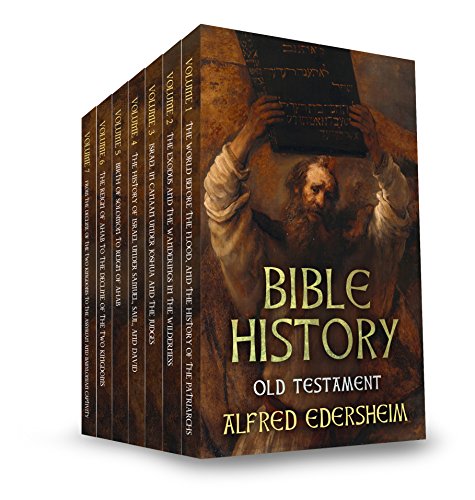 The Old Testament is one of the most fascinating texts that the world has ever seen.

Drawn from the Hebrew Bible it forms the basis of all Christian denominations, whether Protestant, Catholic or Orthodox, they all refer to the Old Testament in some form.

Alfred Edersheim, in this fascinating study, uncovers the Old Testament, removing layers of mystery, allowing readers to more fully engage with the text.

He analyzes the books, chapter-by-chapter, thus providing a chronological history of the Jewish people.

This work is split into seven volumes to make it manageable for the reader to understand each major period that is covered in the Old Testament. Volume One covers The World Before the Flood, and The History of the Patriarchs, Volume Two: The Exodus and The Wanderings in the Wilderness, Volume Three: Israel In Canaan Under Joshua And The Judges, Volume Four: The History of Israel under Samuel, Saul, and David, Volume Five: Birth of Solomon to Reign of Ahab, Volume Six: The Reign of Ahab to the Decline of the Two Kingdoms, and Volume Seven: From the Decline of the Two Kingdoms to the Assyrian and Babylonian Captivity.

Edersheim, at the outset of the book, stated his objective: “I have endeavored to write in a a form so popular and easily intelligible as to be of use to the Sunday-school teacher, the advanced scholar, and the Bible-class; progressing gradually, in the course of this and the next volume, from the more simple to the more detailed.” He certainly achieves this aim in this magnificent study that is worthy of being read by all.

Alfred Edersheim (1825-89) was a Vienna-born biblical scholar who converted from Judaism to Christianity. A veteran minister and missionary to the Jews of Romania, Edersheim left an enduring and priceless legacy to followers of Christ. Among his most widely read works are The Life and Times of Jesus the Messiah, The Temple: Its Ministry and Services, and Bible History Old Testament.